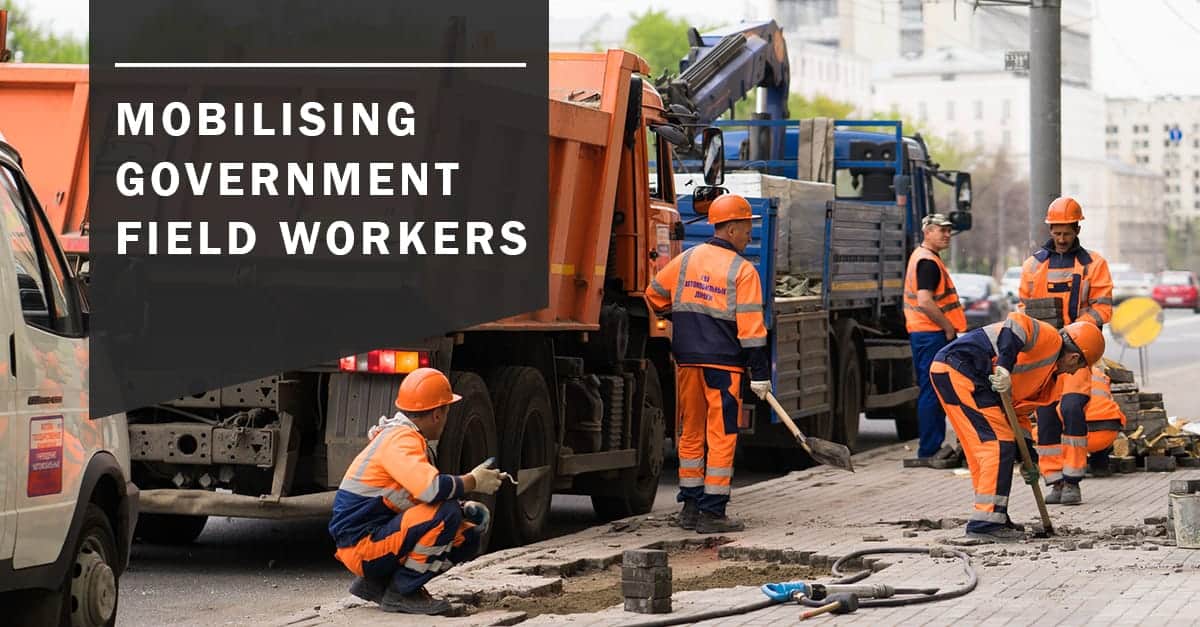 This global focus is a priority for federal, regional, and local governments alike as they face an ever-increasing challenge of balancing their need to be responsive with the need to streamline processes, eliminate inefficiencies, cut costs, and implement employee accountability measures.

High on the list of inefficiencies for many government departments is the use of paper forms in everyday fieldwork duties. Paper forms require a great deal of time and resources to organize causing project management delays, a backlog in work orders completed, inefficient processes, inadequate accountability, and increased costs.

Overwhelmed by the amount of paper in use, some local governments are now implementing and reaping the benefits of native mobile applications.

Purpose-built mobile apps eliminate the inefficiencies of paper forms which are often completed at a later time, not completed at all, or lost on someone’s desk.
The ease at which ‘low-code’ platforms allow for app creation empowers any non-technical worker to create custom forms for their teams out in the field. As remote workers use these (offline-capable) apps on their devices while still out on a job site, their managers can track their progress, review data in real-time and provide up-to-date reporting to the mayor, other city leaders, and ultimately the tax-payers.

Here are but a few examples of government field worker-specific apps deployed via these low-code platforms:

These are just a few examples of how purpose-built mobile apps can help your city’s field workers increase efficiencies. The possibilities are endless. They can make it easier and more cost-effective than ever before to streamline your government’s operations.

Mobile Apps for Government; A Win-Win for Everyone

A great example of a government department embracing mobile app technology is the state of Hawaii. They went fully paperless in 2015 and its reported that that the initiative has simplified document processing across the eight main islands. It has also resulted in significant cost savings, productivity boosts, document tracking improvements and stronger security measures.

Another example is when Muriel Bowser, mayor of Washington, D.C., initiated the 8th Annual “Potholepalooza” — a six-week campaign to fix the city’s potholes — the district had a plan in place to coordinate and track the progress of its workers in a whole new way….

Typically, the District Department of Transportation (DDOT) hires additional repair crews for the duration of the campaign to fill potholes within 48 hours of being reported. Over previous years this was an arduous process involving field crews filling out numerous paper surveys and job sheets then capturing the results manually at the end of each day. Due to the sheer volume of paper forms being captured, progress reports and the like were often delayed leaving managers and tax-payers frustrated and clueless.

This time around however, work crews were able to use apps on their mobile devices with GPS, Media and job-dispatch technology to confirm when jobs were completed and snap pictures of the repairs. The devices were connected to DDOT’s live service request database. Managers and tax-payers alike could track the repair status on their website.

To satisfy the requirements of your managers and remote workers, mobile apps can be used as a comprehensive tool, efficiently pushing electronic data to the field at the appropriate time and collecting custom data on a given project for on-demand reporting and analysis. Using low-code, drag-and-drop technology, there’s no need to take existing software developers off other important projects or hire expensive external consultants.

The number of communities around the world harnessing this technology is growing. You too can be a responsive and proactive government department while simplifying municipal processes and demonstrating to tax-payers that hard-earned dollars are being well spent.